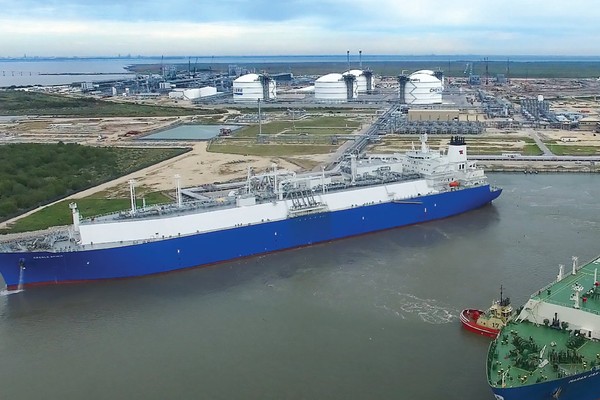 Sabine Pass LNG lost the use of two LNG tanks representing 40% of its LNG storage capacity at the beginning of 2018. The practically oriented analysis shows how the operator Cheniere has used stricter scheduling to compensate for the loss of the two tanks. The extra cost appears largely to be borne by capacity holders and shippers.

On January 22, 2018 it was discovered that LNG tanks S-101 and S-103 (on right and left in the picture, respectively) at the Sabine Pass LNG plant, each with a capacity of 95,000 cubic meters (cm), had suffered ruptures in their inner shells. Cheniere, the owner, was ultimately required to take the tanks out of service until adequately repaired, under a Corrective Action Order from the Pipeline and Hazardous Materials Safety Administration (PHMSA).

At the time, three 4.5 million tonnes per year (mtpa) trains were in operation, and a further two same-sized trains were in the process of being completed and commissioned. The loss of two out of five tanks would seem to fundamentally threaten the basis for continued expansion and operation of the plants. Yet, Cheniere stated in May 2018 that they did not envisage any disturbances of LNG production and shipments.

In fact, the Eikland Energy iGIS/LNG intelligence system estimates from daily gas input flows that Sabine Pass LNG plant utilization in the past year has been 97.3%. This confirms that any loss of output would have had to be minimal. The important questions are therefore how Cheniere has accomplished this, if it has come with reduced reliability or other cost, and if rules of thumb regarding storage adequacy can be rewritten.

Complex computer simulation systems are usually used to optimize plant capacities and to design the key elements for efficient operational procedures. Cheniere may also have done this in the period from first identifying the fractures to accepting the PHMSA corrective action order. However, it is possible that the scheduling staff on their side may have been able to develop some practical workable schemes from hands-on experiences.

While operators never share such operational details with the public, it turns out that it is possible to describe a relatively simple approach that highlight the main factors. These are plant size, production flow rate and ship arrival frequency. For example, small plants and irregular production and ship loading frequencies naturally boost storage requirements.

Conversely, stable production and frequent, regular ship arrivals reduce storage requirements. At Sabine Pass LNG, ship loading frequency is now 0.75 ships per day, which will increase to 0.9 with full production of train 5. The associated production rate is roughly 140,000 cm of LNG per day.

This means that Sabine Pass LNG with five trains in operation is now nearly in the position of being able to plan for one 170,000 cm ship loading per day. Since ships are typically required to enter and leave port during daylight, the minimal operational buffer would be only about one tank of 95,000 cm. This would be an efficient solution, but practically also an impossible hourly balancing act. It gives a baseline, however, on top of which tolerances for specific risk factors can be added.

Sabine Pass has two berths that allow ship movement and overlap flexibility to further reduce operational storage. However, there is a risk that ships are late or unable to enter port when needed, and not all ships are of optimal size. The required buffering must be done with operational storage if production is assumed to be stable. In practice, therefore, the minimal storage requirement for daily balancing is two tanks of 95,000 cm.

This raises the level of required operational balance management to close to a week. However, scenarios can easily be described to show that even the current three remaining LNG tanks would give insufficient operational flexibility. The loss of the two Sabine Pass tanks was therefore significant and must have been compensated by some further mechanisms.

There is in fact relatively strong statistical evidence, using data from iGIS/LNG, that additional operational storage and efficiencies has been realized by 1) increased berth time, and by 2) increased residence time at offshore holding positions and anchorages. This is effectively a combination of floating storage and berth arrival-departure time tightening.

First, the average ship berth time has increased by 6 hours, from 24 hours before S-101 and S-103 closure to 32 hours now. This allows a slower loading more aligned to production and the total effect is calculated equivalent to one 95,000 cm tank.

Second, the ship residence time at offshore positions is highly variable, but has increased from an estimated 35 hours to 70 hours. This increase significantly enhances the ability to bring in ships on time, and if necessary to a second berth. It is difficult to quantify this flexibility in storage equivalence, but it can be argued that the total operational storage flexibility is restored to a five LNG tank equivalent.

In sum, it appears that Cheniere has been able to draw effectively on the scale of the Sabine Pass LNG facility, using well-matched ship sizes and by compensating the loss of two tanks through ship residence time at berth and at offshore waiting areas. This is sustainable, but the extra ship time has come at a cost indirectly borne by capacity holders and/or shippers. The cost is approximately equivalent to 18-30 hours extra ship time, or roughly one ship day-rate on average.

The precise scheduling mechanisms behind the statistical observation are not known, but could easily be realized in the form of tightened delivery programs and firmer attitude to imposing demurrage charges. Cheniere has significant power in enforcing such requirements though established operational procedures. It is not known if capacity holders and shippers have challenged this, and raised the extra burden and cost with Cheniere.

Cheniere has both powers within operational procedures and the possibility of possibility of claiming Force Majeure for the tank ruptures. Effectively, capacity holders must have found it expedient to not challenge Cheniere in this regards and absorb the extra cost until S-101 and S-103 are recommissioned after repairs.