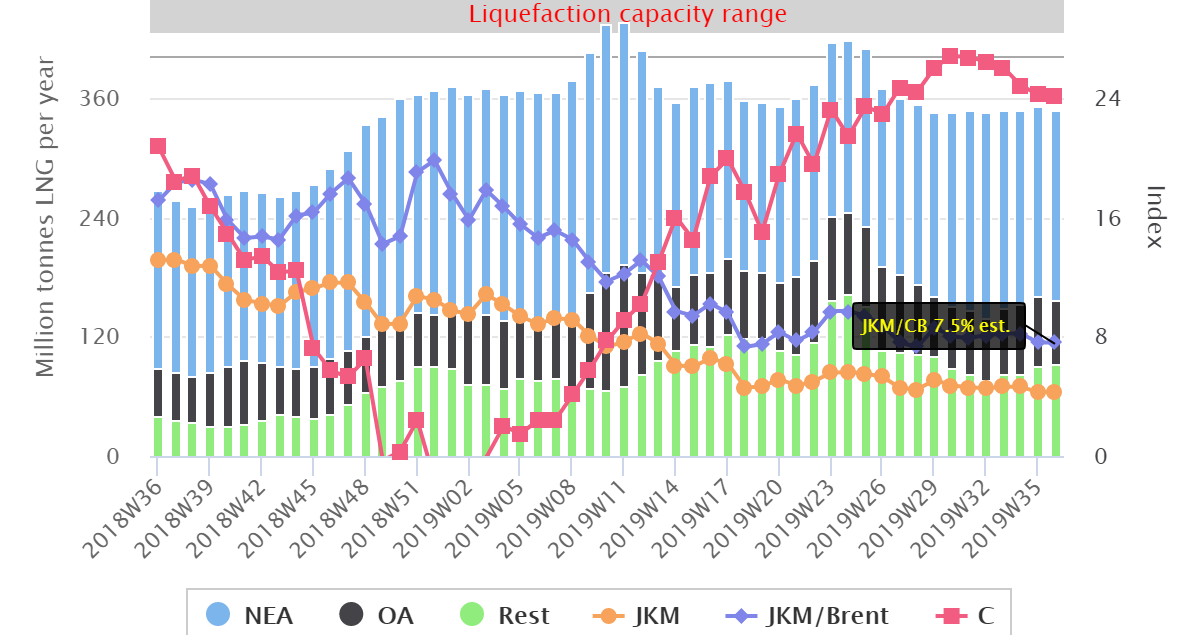 The global LNG supply surplus will double and exceed 50 mtpa in the course of the next 6-12 months. The key reasons are a significant LNG demand weakening, in part because of the startup of new gas pipelines, new LNG plants and recent de-bottlenecking at several trains. Our main scenario now indicates oversupply and low prices to persist to 2025. Insufficient buyer interest appears to be behind the postponement of liquefaction plant final investment decisions planned at Driftwood LNG, Rio Grande LNG, and Lake Charles LNG. 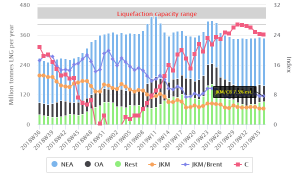 The current oversupply is at a level that in 2019 caused prices to fall to fully marginal levels globally. There is now an increasing risk that the supply surplus is building further, beyond the market’s near-term infrastructural and commercial ability to absorb LNG. Mechanisms that previously helped balance annual LNG requirements, such as under-lifting and make-up periods, have largely disappeared in recent contracts. Instead, new contracts are premised on extensive destination flexibility and a combination of liquid local and global markets able to self-balance via price signals. LNG, gas pipeline and power markets and prices now increasingly fuse and balanced together.

Operators therefore face significant challenges in finalizing the important annual delivery plans (ADPs) in the next months. These will determine to what extent production will be suitably aligned to the revised demand outlook. Some residual capacity holders in particular, such as Cheniere at Sabine Pass and Corpus Christi, can be instrumental for the actual short-term LNG offered to the market and associated price impacts. The overall incentive structures typically favor maximal production, however, and developments through 2019 have clearly shown the price effects of forced lifting and supply overshooting.

This situation highlights that LNG is now exposed to the same risks and integrated in conventional energy markets. Eikland Energy believes it is highly likely that new ADPs for the next year in aggregate will be set higher than market demand. As a consequence of growing overall market size, structural LNG oversupply and delivery rigidities we expect marginal price levels to be the norm for several years ahead, only deviating during regional demand peaks or supply interruptions.

While an LNG supply overhang has been expected for the 2019-2022 period for some time, it has largely been assumed that demand would strengthen and that prices would not fall to purely marginal levels. We will in the remainder of the document review key developments that support our view of a significant increase in the global LNG supply overhang and some key implications.

On Monday 27 August 2019 the Mexican government and CFE on one side and Carso, Fermaca, TC Energy and Sempra/Iennova on the other side announced that the dispute over tariffing of several new pipelines had been resolved. This means that gas flow startup is now imminent for the strategically important 2.6 Bcf/day Valley Crossing/Sur de Texas-Tuxpan pipelines, and connections onwards to the west and south.

Mexico’s gas demand is currently 8 Bfc/day, of which 6 Bcf/day is imported. Of this, LNG regasification at the Altamira and Manzanillo terminals have recently averaged 0.8 Bcf/d, or 6 mtpa of LNG. Both terminals have in 2019 largely been supplied from US LNG. According to the buyer, CFE, LNG imports to Altamira are expected to contract immediately following the Sur de Texas-Tuxpan pipeline startup, and also at Manzanillo when the new bidirectional Manzanillo-Guadalajara expansion is commissioned.

The effect of the startup of the new pipelines is that the capacity of a full US LNG liquefaction train will be released for export to other international markets by the end of 2019 and with capacity to support significant additional Mexican requirements.

This release of LNG demand will add to the supply availability coming from liquefaction trains starting at Cameron and Freeport trains 2 and 3, and Elba Island’s 10 mini-trains. De-bottlenecking through this summer at Sabine Pass has increased capacity further, by 1.5-2 mtpa. But significant changes are taking place elsewhere too.

Additionally, both Turkey and Italy have recently been important destinations for short-term LNG trade. LNG demand in these countries may therefore fall shortly into 2020 by as much as 5 mtpa. This follows major LNG import reductions that started in 2019 in both Egypt and Israel where new gas fields, including giant Zohr (3.2 Bcf/d) and Leviathan (1.2 Bcf/d), are rapidly causing LNG demand to disappear. In fact, both Egyptian export plants, Idku and Egyptian LNG with 5 mtpa capacity each, have been reactivated and can reach capacity in the course of 2020. The need for LNG imports to and via Jordan, another short-term trade destination, is also set to be weakened.

LNG producers will also see competition from the startup of several other strategic pipelines into key markets. This includes the 38 Bcm/yr (27 mtpa LNG) Power of Siberia pipeline to China from 1 December 2019, the 55 Bcm/yr (39 mtpa) NordStream 2 pipeline to Germany from Q1 2020, the 31.5 Bcm/yr (22 mtpa) TurkStream pipeline to Turkey and the Southern Corridor with the 10-20 Bcm/yr (7-14 mtpa) TANAP/TAP pipelines to Italy both starting up in January 2020.

While near-term LNG demand could increase moderately in Korea and Taiwan, the likely reductions in Japan are large. There are 37 operable reactors, of which nine are producing (up from 2 in 2018). A further 17 reactors that are currently in the restart approval process with a deadline next summer for the implementation of security measures. Japan’s LNG import requirements could consequently rapidly decline by 5-10 mtpa, and eventually as much as 20 mtpa, which is equals the capacity of four LNG trains.

The long-term potential for sizable absorption of the excess LNG supply lies in China and India. However, neither country presently appears willing to, or capable of this, in part because of LNG regas or pipeline capacity limitations. China’s regas plants are effectively already operating at capacity. The trade war with the US is also hinders and imports via the Power of Siberia pipeline is likely to be prioritized. Alternatives to LNG may over time also get higher priority.

In sum, the structural oversupply of commercially flexible LNG that emerged early 2019 is likely to expand into 2020 and exceeds 50 mtpa. With misaligned ADPs the current marginal price level for LNG can therefore persist to beyond 2022 as over-contracted buyers and residual capacity holders seek to place volumes in the market. Cargo placement difficulties may therefore in periods be greater than experienced in the spring of 2019.

The low spot LNG prices have brought typical oil-price indexed long-term LNG contracts at 11-14% of crude oil to be severely out-of-the-money. In an extended market surplus situation it is likely that contract price reviews will be triggered. In addition, some buyers may simply refuse to take cargoes, under a “market out” argument, such as when India failed to take LNG from Qatar in the 2014-2017 period.

The next three years are therefore in the current outlook likely to give razor-thin margins for many suppliers and challenge their operations. Even non-LNG energy players are now significantly exposed to LNG supply risk via natural gas and power prices. Month-ahead prices for natural gas in Europe, for example, have for some time not reflected the most likely LNG supply as ships have changed destinations and several operators have cloaked destination intentions. This prompt/forward spread and market inefficiency has been exploited by some players.

The growing volumes and impact of LNG on the energy market therefore bring a need for energy players at large to strengthened processes and analytical inputs in this area, as illustrated in the chart below. This could include the integration of key parameters from real-time LNG intelligence, supply and market price impact forecasts into market price and trading models, e.g. as provided by the Eikland Energy iGIS/LNG system.

Do not hesitate to contact us in case of questions, or to discuss solution proposals, at contact@eiklandenergy.com or call +47-99517555.