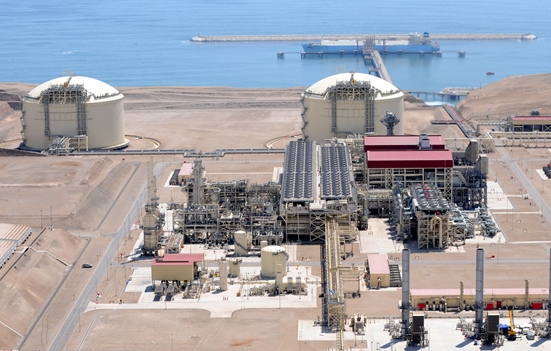 International LNG contracts fall into groups mirroring the market conditions at the time they were signed. Oversupply drove the oil-to-LNG price multiplier (from USD/Bbl to USD/MMBtu) below 0.04 in 2003, but shortage caused it to rise to over 0.16 in 2013. The opportunity for regular openings for contract price reviews are intended to correct some imbalances over time, but the scope is often limited. The challenge for producers may be even more pronounced in gas-price indexed LNG contracts when prices decline.  The note discusses these general issues from the concrete perspective of the Peru LNG project at Melchorita as an example.

The single-train 4.45 mtpa Peru LNG plant started operation in 2011. Following the sale of Repsol’s LNG business in 2014, Shell is now the commercial operator. Its main firm sales contract (via the Camisea consortium) is with CFE, the Mexican state electricity company, for up to 3.68 mtpa for 15 years and an ACQ of 3.2 mtpa. CFE average offtake is only 60% of ACQ (40% of plant output), indicating major seller-side market diversion flexibility financially incentivized for CFE. The remaining capacity has largely been sold at far higher prices to Spain (35%) and Japan (25%). The gas suppliers, Hunt, SK, Marubeni in addition to Shell, are paid on a netback basis.

Sales to Asia gave high netbacks during the crest of the “Fukushima Era” even with the cost of crossing the Pacific. Sales to Europe have realized prices between those to Mexico and Asia. The very low netback from sales to CFE, however, has been hotly debated in Peru from the very beginning. The price delivered ex ship at the Manzanillo receiving terminal is 91% of the forward month Henry Hub price less 0.03 USD/MMBtu. In February 2015, when the Henry Hub price was 2.85 USD/MMBtu, the netback to the liquefaction plant (FOB base) was only 1.78 USD/MMBtu. Shipping cost for the 2650 nautical mile journey co-varies with gas and oil prices but was on the order of 0.81 USD/MMBtu in February.

While the high Asian LNG prices buffered the impact of low-priced sales to Mexico well into 2014, netback revenues from Asian and European sales have since collapsed from above 12 USD/MMBu to 4.91 USD/MMBtu in February, giving an average FOB selling price of 2.38 USD/MMBtu. The continued weakening of both crude oil and Henry Hub gas prices, to about 45 USD/Bbl and 2.20 USD/MMBtu respectively, results in an average netback to Peru just above 1.50 USD/MMBtu as of November 2015. This gives a contribution margin to fixed LNG plant and upstream costs of just 1 USD/MMBtu, far below the full cost of about 4 USD/MMBtu. The marginal revenue of LNG sales to Mexico now gives a negative contribution margin to the wellhead.

The economic pain to the project and to Peru is therefore real, with little expectation of near-term improvement. Unless held up by new US LNG export projects, the Henry Hub price may actually decline further as domestic pipeline projects are completed, reducing congestion basis differences. European gas prices have fallen from 11 to below 6 USD/MMBtu, and the October spot import prices to Japan is 7.6 USD/MMBtu. (Shell also sells 0.5 mtpa LNG to CFE at Mexico’s Altamira terminal, mainly from its 20-25% equity position in Trinidad’s Atlantic LNG project. This contract expires in 2021.)

Shell’s Manzanillo contract with CFE provides for price review with effect from 2016. While the detailed contract terms are not public, the wording of price review clauses follow general patterns. The contract with CFE is strongly market-based. With continuously increasing pipeline gas imports from the US, CFE will undoubtedly not have problems to argue that Henry Hub still is the correct index. The 91% “passthrough” and discount are then unlikely to see significant changes. It would be too much of a stretch to argue for a price parity with US LNG exports through the Panama Canal to Asia.

The contract is undoubtedly important for CFE and offers a competitively priced supply on the west coast where there is no local gas. Gas buyers classically assume volume and market risk, and sellers absorb price risk. This applies to both pipeline gas and LNG. Given the Peru LNG indexation mechanism, however, CFE takes little volume risk. The key question is what Shell, the sellers and the Peru government do if the income outlook for the next 5-year period is as poor as it looks now.

Shell is already somewhat protected via the back-to-back liquefaction plant and upstream gas supply contract. The other shareholders and stakeholders, including the Peru government may not see it in the same way. The contract between the plant and Camisea seller consortium skews net cash flow effects between the parties.  The dispute regarding royalty payment basis after vessel reload for LNG delivery to a higher-paying market indicates the tensions involved (it was settled by World Bank ICSID arbitration in May 2015.) Public and diplomatic channels could therefore also be engaged. On its side, CFE would probably see the risk of financial default of the project or rising political tension between Peru and Mexico as problematic.

A threat of sovereign action or upstream bankrupcy is a possibility, but such tactics are not without risk. Certainly Shell is unlikely to favor extreme actions. A tempering argument is that the income from sales to Asia for three years has helped reduce project debt and the most significant economic exposure. (It is certainly bleaker for the many new LNG projects coming on stream in the time ahead.) The commercial parties may possibly therefore decide to accept the difficult situation until the next and final price review in 2020/21.

The negotiating room for price changes does seem limited. A wider set of outcomes in a price review may be possible if the contract or the contract background provide for an understanding of a balancing of risks or rewards. Pressure from the Peruvian government may in this case force some action that the commercial companies will find helpful. An interesting non-price alternative is to seek a reduction of contract volume to increase sales to somewhat higher-paying markets. This option was already aired before the project started deliveries.

Classic ways to accomplish such changes could include extension of the contract term, should the resources allow it, or through buyer participation upstream. With Mexico’s energy industry liberalization, perhaps even a Mexican upstream venture in Peru could be feasible. CFE would play a key role in this. Whatever the outcome, Peru LNG is a concrete example that highlights issues that many other LNG projects also face in a low-price environment.

While LNG projects are highly capital intensive, variable costs are less than 20% of full cost.  Marginal production economics are therefore typically resilient. Continuity is largely ensured and LNG will flow even if prices remain low. However, since many projects now return less than 30 cents of the capital dollar, many companies will review their portfolios and strategic positions. Repsol’s sale of its LNG business to Shell illustrates the scale of possible reconfigurations. That includes the possibility that price reviews trigger risk-balancing upstream integration by buyers.

Peru LNG is far from the only LNG project with these challenges and opportunities.  Their common denominators are remoteness from key markets, limited operational flexibility and financially exposed ownership structure.  With a few notable exceptions, periodic price reviews are unlikely to have the potential to fundamentally resolve the challenges faced.

Data sources
The information in this article i.a. uses plant, contract and operational data from Energy Perspectives’ web-based global iGIS/LNG and natural gas database, covering current and planned LNG projects in the world, quality-checked, standardized and continuously updated.  The market and contract assessments draw on Energy Perspectives’ industry experience over more than 30 years.  For questions contact Kjell Eikland, Energy Perspectives at DID +47-99517555 or by email kjell.eikland@eiklandenergy.com.