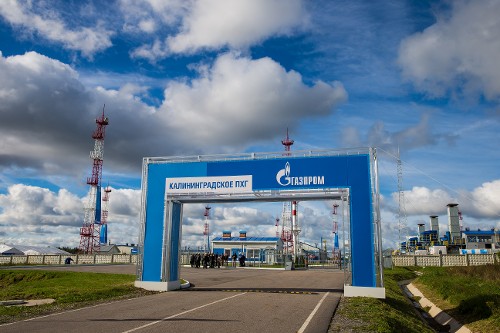 In the last week of November 2013, global energy media have reported that Gazprom plans to build a large LNG export terminal in its Baltic enclave Kaliningrad – still East Preussia to some.  Gazprom says it will prepare its “Investment Rationale” in 2014 for a possible export plant startup in 2017.  On its side, Lithuania commissions an LNG import FRSU in Klaipeda harbor early in 2014, and media commentators speculate that Gazprom’s Kaliningrad plan is a revenge for this.

Seemingly corroborating Gazprom’s seriousness is the opening of a large salt cavern gas storage in Kaliningrad in 2013.  Yet there is something that just does not compute.  The second stage of the North Stream gas pipeline has not been sanctioned.  The idea of a St. Petersburg LNG export terminal appears abandoned, along with the Barents Sea Shtokman project.  Could a Kaliningrad project be a replacement?

We know that the European gas market is contracting.  A big capacity build of renewables is taking place, along with conservation measures. Faced also with declining indigenous gas supplies, Europe seems to secure new gas flexibly from other sources, including gas from US and Qatar, for mid-term supply.  On its side, Gazprom is unwilling to rescind classic oil indexation in gas contracts.

How could then Gazprom be planning LNG export from Kaliningrad?  Small scale LNG for Baltic shipping and high sulfur/heavy oil replacement certainly could make sense, but the larger concept seems hard to understand.

Perhaps the September 23 Gazprom press release from the official opening of the Kaliningrad gas storage tells more.  Here, the discussion is about how recent cold winters have reduced availability of gas in Kaliningrad, being literally at the end of the pipeline, and how the new gas storage will alleviate curtailments and give basis for additional demand.

Perhaps a misspelling, or perhaps not, the press release refers to a possible LNG RE-gasification terminal in Kaliningrad.  In the context of the press release, a regasification terminal certainly would make a lot more sense as a backup in case of insufficient Gazprom pipeline supply.  Perhaps, seeing the plans in neighboring Lithuania, the local administration initially was planning a similar concept.

Witnessing now the Russian power play in the Ukraine regarding a EU approchement, a similar play in Kaliningrad would naturally be much more friendly.  The Moscow solution was simply a new gas storage, that hopefully will give similar system value, flexibility and security of supply that Latvia enjoys with its large seasonal Inchucalns gas storage.

This is the Energy Perspectives take on Kaliningrad LNG.  The old nation of chess players, Russia, may just not have been able to resist playing an LNG export move.  In chess, the move of a pawn may often be completely misunderstood.