At the end of June, the UK Department of Commerce and Climate Change and the British Geological Survey released a revised, but still early assessment of domestic shale gas potential. For the area studied, the Bowland-Hodder shales, the 64 page study concludes with a significant gas-in-place best estimate of 36700 BCM.  Assuming 10% recovery, i.e. moderate fracturing and well density, an extraction strategy over 35 years could theoretically yield a plateau production rate of 100 BCM/year.

With UK gas consumption now at 90 BCM/year, and witnessing US success with exploiting shale resources, such a potential is too big to ignore; particularly in a situation where conventional domestic supply declines rapidly.  With negative experiences from Poland over the past three years however, significant questions remain.

Extracting a clip from NASA’s famous 2012 picture of lights in the world at night, we have added this as an overlay to the BGS shale gas map of the UK to show population and urbanization. 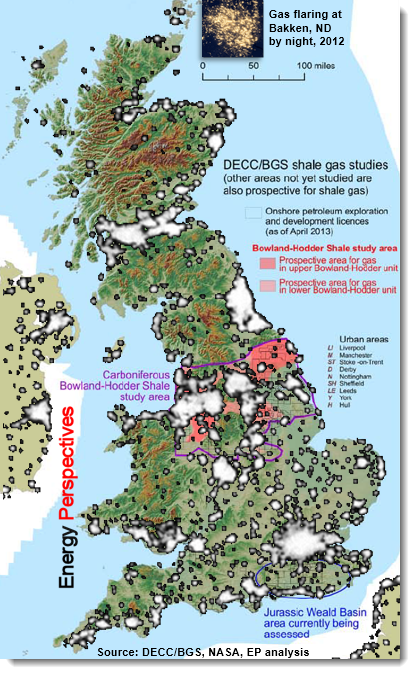 We have also placed a picture showing flaring from North Dakota’s Bakken wells to scale, i.e. with a central area of about 50×50 miles.  It shows that about half of the geographical area of the shale basin examined is densely populated, in stark contrast to rural North Dakota. 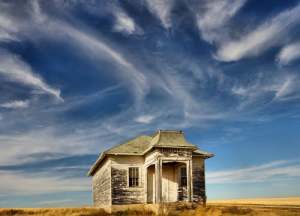 In mid-2013, there are about 9000 producing wells in the Bakken, and several townships show signs of intense exploration.  Parallels can be drawn to shale exploration in Haynesville, Barnett, Eagle Ford and Marcellus, and the scale of operations required is daunting.

There are now 180 active rigs in North Dakota, largely AC-driven and with 1500 Hp or better, and strongly suited to horizontal drilling.  The supply infrastructure for land preparation, water supply, “fracing” outfits with supply of proppants and water – around 200 trucks of with 40 tonnes of water per well –  indicate the scale and coordination required for exploiting Bowland-Hodder effectively.

Even with a well-developed gas pipeline infrastructure and the most encouraging UK terms for shale gas exploration and production, an ultimate full-scale development will therefore require people, equipment, and competence that cannot be built quickly.  It appears that dense population and complicated access will complicate operations and reduce development productivity in major parts of the shale area.  The dramatic 3x improvement in the shale E&P supply chain productivity in the US will be hard to copy in the UK, with implications for cost.  Unfortunately, the BGS report does not give much hope that economics will be helped by associated fluids production, i.e. light oils.

At the same time, the potential is exciting and, even allowing for complications, shale gas could help stabilize UK domestic gas production.  The big questions are: at what level of production can stabilization be expected, at what gas cost, and at what realistic tempo can ramp-up be achieved?  Based on existing drilling rigs and equipment alone, there will undoubtedly be a number of wells drilled, and important experience gained.  By 2015 it may be possible to tell if shale gas can really develop to its potential in the UK.