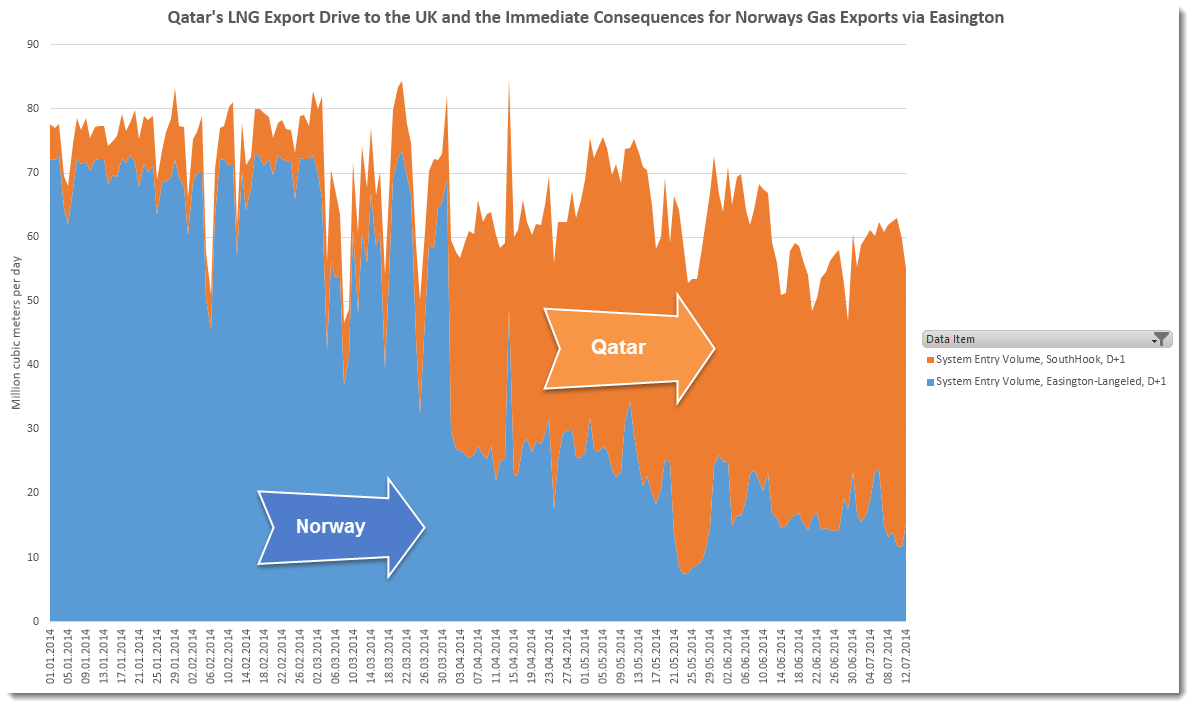 Overstocked gas storage facilities and a mild winter have been blamed for the strong fall in European spot gas prices in 2014. However, the surprising increase in LNG imports from – and by – Qatargas to the UK this spring has gradually emerged as the main reason for the price decline.

Energy Perspectives’ root-cause analysis points to four key factors for the increase in exports by Qatargas : “Islamic financing” requirements of large new petrochemical projects in Qatar; the recent gas surplus in the phase-in of new pipeline supply in China, reducing the need for Qatari gas; a need by Qatargas to make a strategic market statement in the face of other supplier competition; and the availability of LNG from the newly refurbished LNG Train 7.

These factors show dependencies and exposures for both the European energy market and individual players. Case in point, the increase in LNG imports by Qatar does not stem from LNG supplied under recently extended contracts with Centrica, Petronas and E.on, but apparently from “equity” LNG to Qatargas’ own South Hook terminal.   The rapid supply increase of 30-40 mill. m3/day, near 20% of UK demand, has impacted not only LNG supply, but also strongly nominations under pipeline-based contracts and energy demand.

For example, our recent analysis of variance, comparing the 2014 market changes to conditions in 2013 and 2012, shows that Norwegian natural gas exports via Langeled to Easington have been brutally affected, suffering a 60% decline, literally overnight, on April 1. 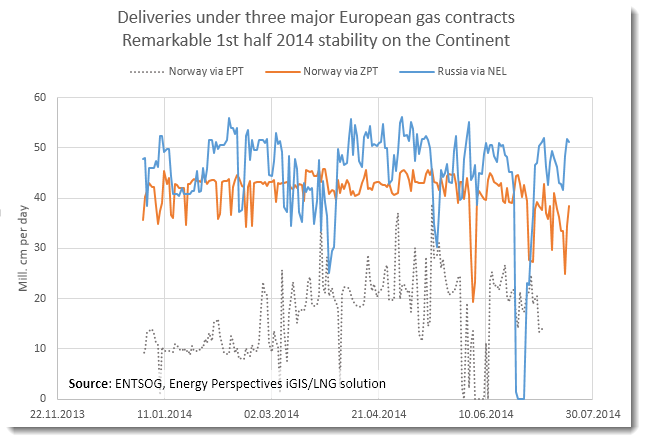 The volumetric impact of Qatar’s export drive has therefore thus far been borne by Norway, who has seen a reduction in exports equivalent to a 70% displacement factor. Other producers have been largely shielded from volume effects, but Norway is doubly hit via spot price exposure in North-West Europe. These are truly signs of a market share competition, whether intended in its full scope or not. However, it is doubtful that Qatar anticipated that Norway would be hit disproportionately.

It is apparent that developments in the European and global markets must be followed closely. The sensitivity and precarious state of the market concerns all players, both suppliers and buyers.   Energy Perspectives will shortly launch the iGIS/LNG business intelligence solution (see separate post) with advanced tools for assessing natural gas markets and LNG supply and demand.  As illustrated here, the solution includes daily aggregate gas market flow data, features not previously seen in a single application.