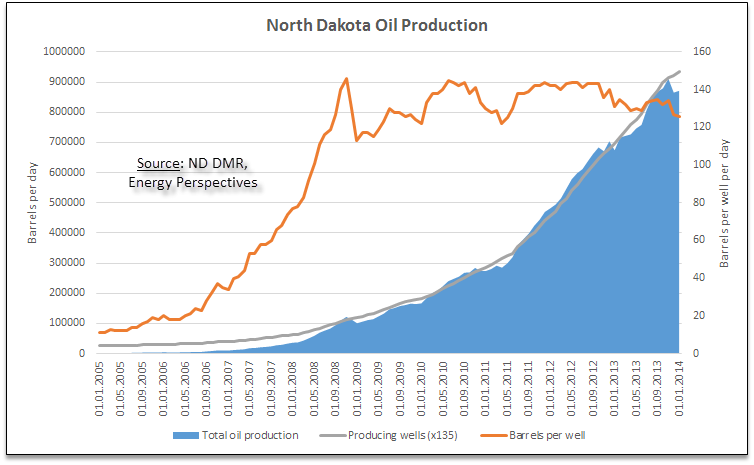 The explosive growth in North Dakota oil production, mainly driven by exploration in the Bakken and underlying Three Forks shales structures, has driven a resurgence in US energy supply confidence.  In parallel, the Eagle Ford and the Marcellus are enjoying specacular growth, and confidence is high.

Yet, there is increasing evidence that oil and gas companies are now actively exploring new plays.  Haynesville gas production peaked in early 2012, and the Barnett is also seing some decline.  Most aggregated federal production data is based on models and samples, and actual production data can be more than 6 months delayed in several states, such as Texas and Pennsylvania.

North Dakota Department of Mineral Resources is an exception, and quickly publishes data that is both accurate and comprehensive.   January 2014 figures are available and show that production may have peaked, at least temporarily, in November 2013.  Weather conditions in the US have been tough this winter, and reports of wells freezing have been abundant.  It is therefore reasonable that “cold headwind” may have given setbacks.

However, while overall production has continued to rise, data now shows increasingly clearly a disturbing downward trend in per-well production.  This trend trend seems to have started in 2012 with an initial very moderate slope.  The number of active drilling rigs is very stable, and the noticeable decline is therefore a sign of gradual stabilization of the well-age distribution and that productivity increases have crested.  Effectively, the Bakken has matured.

The key question, however, is not if Bakken has peaked, but what an effective sustainable production level is beyond this winter.  The new data may suggest what to expect in the next years, and a peak around or below 1 million Bbl/day is consistent with analysis we have done recently related to effective resource management over time.  The recent North Dakota decision to not accept continued extensive flaring may be a step in this direction.

For Eagle Ford and Marcellus, our expectation is for a peak late in 2014, made more likely or given higher confidence, we believe, by the strongly increased oil company focus on the Utica and the Permian/Wolfcamp, but also very new step-out plays.