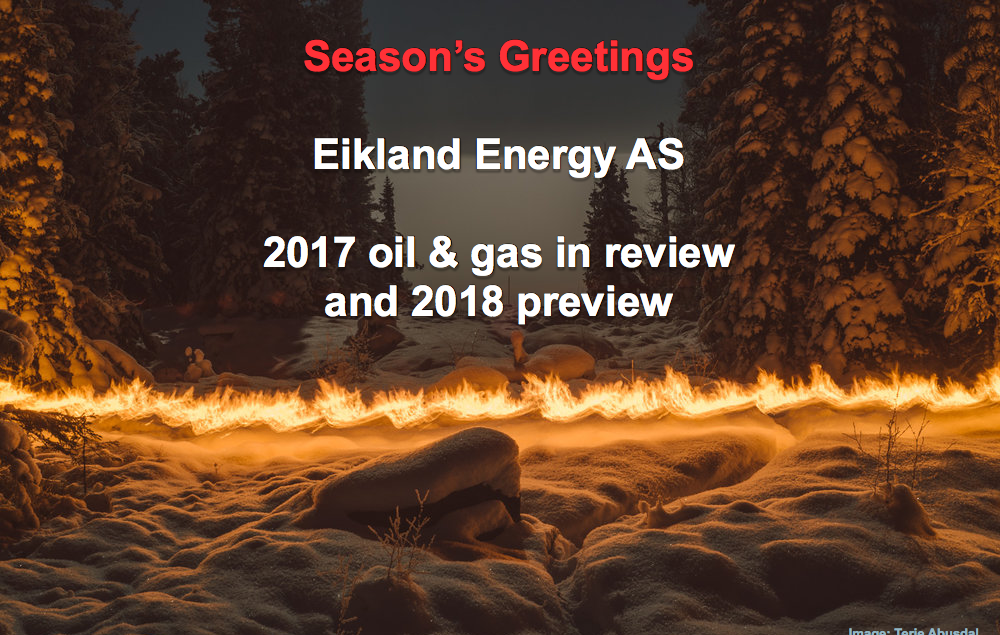 “From Shell shock, to Total encore and the resolution of the strategic Enigma.”

At the tail end of 2017, oil prices are back to a level where many think they should be, between 60 and 70 USD/Bbl.  January 2018 Asian LNG prices are above 10 USD/MMBtu. While US drilling activity has, as expected, followed oil prices, shale oil production no longer scares OPEC the way it once did. Like North Sea oil in the past, this new supply province found its position in the global market. On the other end of the scale, both heavy oil and ultra-deep oil resources appear to have become marginalized.

At the worst of the oil price trough, Eikland Energy presented an outlook on prices based on industry business cycles, that projected the price level we now see. The analysis also pointed to on-going transitions, such as a trend towards non-fossil based energy supply, that have deep price effects and business consequences further ahead.

We now see that a number of leading companies are executing on this general strategic direction, but choosing approaches that vary mainly in vertical focus and time horizon. Reflections on what has happened and where we stand are common at this time of the year. This year, the reflections give particularly rich perspectives for what lies ahead.

While tight financial controls still dominate in the oil industry, 2018 budgets look to be settled without the distress of the past three years. A series of major projects are now coming on-stream. After having strained company cash-flow the past few years, these projects now appear set to bring generous cash-flow in the period ahead.

It appears that some financially exposed companies successfully gambled on oil and gas prices recovering and were able to avoid the worst outcomes. Among the largest oil and gas companies, Eni is now realizing attractive terms for farm-ins by majors in both the Mediterranean and in East Africa. Far more troubled Petrobras may also be able to capitalize on its resources.

On the other hand, the acquisition of BG Group by Shell, planned before the energy price fall, but executed during a period of falling energy prices, was spectacular both in terms of its timing and its size. The deal highlighted that Shell’s long-time reputation for methodical, audacious strategy and for quality execution is still well-deserved. Shell’s apparently successful strategy even appears to have influenced Exxon, BP and Total to move in the same direction as Shell. A match-maker analysis of sensible mergers suggests that there is potential for several more interesting deals.

Implicit in many of the recent strategy changes is a hint of a move away from oil, and towards creating new sustainable value chains that are also scalable. Some companies like EdF and DONG are set to completely separate fossil from non-fossil activities. The background for this is not only COP-21, but also rapid and dramatic technology developments and cost reductions, with market penetration brought to the “take-off” level.

Globally, coal has rapidly become villainized not only because of CO2 and global warming, but perhaps even more due to coal’s role as a major source of pollution in key urban centers in Asia. Pollution in urban centers is exactly what brought natural gas adoption and a focus on energy efficiency to the US in the 1950’s, to Europe in the 1960’s, to Japan in the 1970’s, and to Korea after 1980. This time the move away from coal follows a broadly based trend towards cleaner energy among industrializing countries, small and large.

This trend is possibly one key reason why Shell decided to acquire BG Group. Management across the industry is now mindful of the rapid changes taking place in energy markets, and the need to embrace strategic change with financial soundness. The 10-year anniversary of the iPhone and the telecom industry’s restucturing parallels the complete restructuring of the EU energy industry following the second energy directives in 2004 and the third in 2009. As a result, companies have broadly adopted competition-leapfrogging Blue Ocean strategy principles.

The well-advanced energy transformation in Europe is now in the process of giving Europe a major business advantage, that is not yet well-recognized. A large part of energy import depencency and cost has been eliminated by new energy technology funded by low-cost domestic capital. This investment in energy transformation has now entered its payback period. The effect of the energy portfolio risk management initiatives of the past decade has been to make Europe an important global swing energy exporter.

Europe’s growing strength, flexibility and new independence has for most of the year brought natural gas price stability balanced at the margin against US levels. The hurricanes in the Gulf of Mexico and the nuclear tensions with North Korea simultaneously spawned an LNG supply disruption and a powerful LNG storage build in South Korea, yet did not affect European gas prices.

Both 2018 and 2019 will see the startup of a number of large oil and gas projects. Oil has a well-developed global value chain, and projects will be smoothly integrated. The largest and most important pipeline gas and LNG projects coming on stream are geared to new international trade. One of the significant challenges ahead is to successfully integrate the relatively sluggish LNG supply and trading chain into the load curve.  Fast-moving trading firms thrive in such complex markets.

Both Shell and Total see the increased importance of scale and a combination of local and global presence. When markets evolve and become more complicated, rounds of restructuring typically take place, and in LNG the positioning game is well under way.  Can regional players succeed by carving out a protected niche, or must they cooperate will others? A number of companies in Asia now face this challenge. American and European companies before them needed years to resolve this dilemma.

Conversely, in 2018 global players will probably further develop their regional and local delivery models, whether in an integrated manner or through cooperation models and alliances. Among the very interesting questions is if newly integrated Rasgas/Qatargas will aim to build an internal trading organization, like Petronas, or rely on existing partners and ad-hoc deals. Already, even recent cooperation models between LNG buyers, like JERA, appear to move in the direction of deeper integration.

The commercial experience that will be gained through the 2018 and 2019 wave of projects will feed back to management and indicate whether deeper changes to business structure are necessary. While there is now a drive towards obtaining support for a “second wave” of US-sourced LNG projects, market uncertainty can complicate interest in underwriting such upstream developments. Those companies that don’t have the required value chain and are unable to commit to additional supply may fall behind.

The design and realization of a coherent, flexible and efficient value chain is therefore probably the biggest challenge for the industry ahead. Even Bitcoin and Blockchain technologies are now being assessed by the new generation of oil and gas companies. If current primary players are too sluggish in their responses, independent traders will certainly be there to fill in the gaps.

So, on leaving year 2017, the oil and gas industry faces a wealth of opportunities and appears ready to transform itself. The prospects are as exciting as ever.