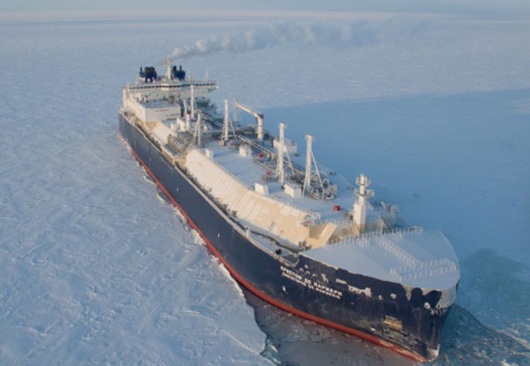 Following the official opening and loading of the first cargo on 7 November 2017, the Yamal LNG project quickly showed its promise and impact on the gas market in North-West Europe. In quick succession, four 172,600 cm LNG ships have been brought into play, the Chris. de Margerie, Boris Vilkitsky, Fedor Litke, followed by the first loading of the Eduard Toll on 17 January. The fifth ship for train 1, the Vladimir Rusanov, is now in the Indian Ocean, bound for Yamal, but avoiding the Northern sea-route winter ice.

For a 1-train plant of the size of Yamal LNG, one ship loading per week would be expected at capacity. Six cargoes have nominally been loading thus far. Production ramp-up has therefore been relatively fast and apparently uneventful this far, even accounting for the Boris Vilkitsky “dry-run” to the Dutch Gate LNG terminal, presumably for vetting purposes. The completion of train 1 therefore seems to have been a success, and the project’s execution model, and in particular Total’s operational experience, has paid off.

Although only two quasi-full cargoes have thus far actually been discharged, at Grain LNG and at Montoir LNG, three are at sea as of 18 January 2018. Both discharged cargoes were subsequently reloaded and are now at sea, with apparent destination the Distrigas Everett LNG terminal, Boston, US and Kansai Electric’s Himeji LNG terminal, Japan, respectively. These reloads suggest underlying Engie contracts (now in the process of being transferred to Total.)

Of the three cargoes not yet discharged, Chris. de Margerie is bound for Dragon LNG at Milford Haven, Boris Vilkitsky for Dunkirque LNG, and Eduard Toll for Montoir LNG. Eduard Toll is well-matched with the inbound Symphonic Breeze, for a possible cargo reload to India or China. The Boris Vilkitsky cargo is most likely for Engie’s French portfolio, while Chris. de Margerie probably (and contrary to industry press reports) carries the first cargo to the reputed contract with Petronas.

While the Zeebrugge LNG terminal is building a bespoke 5th tank to serve reloading from Yamal LNG, the tank is not expected to be ready until the beginning of next gas year, i.e. October. It is also unclear when Gate LNG will receive its first actual deliveries. In any case, North-West Europe gas markets is now seeing the first signs of a major new source of supply and possible volatility.

While conventional pipeline gas supply will still form the competitive bed-rock of European markets going forward, the competitive effects of Yamal LNG on other LNG suppliers could bring concerns for them. Of the current five cargoes, three are reloads and two are for “domestic” European demand. Now is the peak of European winter demand, so there is not much impact on volume balances and competitors. Spring has the potential to change this, however, with Yamal LNG volumes and complex trades rising and competitors possibly being pushed south.

Yamal LNG is now additionally demonstrating vessel-borne delivery flexibility by its new MEGI-powered ships with partial reliquefaction. Already the Chris. de Margerie has visibly shown that the MEGI ships can easily and economically manage boiloff while idle, for more than a week at Skagen anchorage, and far longer than conventional vessels. While boil-off significantly constrains the operation of older vessels, important new physical and commercial flexibility is now provided with MEGI LNG ships, even inside of emission control areas.

Together, these developements suggest changes ahead that will be felt broadly. Effectively, the Yamal model adds a reload-based, liquidity-enhancing “churn” to LNG trading as it interfaces with pipeline-based gas markets and potential physical delivery. The Yamal LNG capacity holders will be the primary potential beneficiaries.

Yet, Yamal LNG has only started its first train, and two more are on the way. Much can therefore happen over the next two years, and not the least as we see how the Yamal LNG summer operation model is implemented. If the scenario evolves as indicated, several players are likely to consider implications and strategic responses.