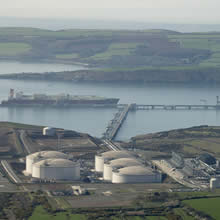 On 1 April 2014, a veritable flood of natural gas appeared from the South Hook LNG terminal in the UK.  Is there a risk for the same again this spring?  The Energy Perspectives iGIS/LNG forecasting system, shows that an April offensive is not yet apparent.

Will Qatar (and partners) again surprise the European market with a regasification rate of above 50 mill. m3/day again as Asian winter demand comes down? It is vital for buyers and traders to be have clarity on these matters. The 2014 campaign lasted from through August and strongly affected UK imports from Norway and UK-Belgium interconnector flows. Qatari LNG was the not-so-small straw that caused the 40% NBP gas price drop, from above 70 p/Th in March to below 40 p/Th by June.

After several highly concentrated Q-max ship arrivals in the second half of both January and February 2015, sendouts have been fluctuating but have just risen to above 30 mill. m3/day.  See the live “sparkline” graph under the iGISLNG tab that shows sendouts from Milford Haven for the past 28 days. (Similar charts are available for 450-plus points in Europe.)

The recent batch of vessel arrivals suggest that the terminal presently has substantial commercial flexibility within its very large technical capacity. However, our 4-week forecast only substantiates a 10-15 mill. m3/day average output unless further UK-bound cargoes are detected. A higher frequency of vessel arrivals is therefore required to start a new spring campaign.

While Asia will also see below average temperatures for the coming 10 days, the crucial question is if end-of-winter tactical dispositions have already been made.  It may also be that Qatar and partners see their interests best served by playing the European market much more “gently” than last year.  This could, for example, be done by a smoothed delivery profile and smart storage and sendout management. The winter sendout has followed such a pattern to now.

The iGISLNG forecasting service helps shed light and gives early warning on LNG supplies for all importing countries in the world. Forecasts are updated dynamically based on new ship data throughout the day, capturing any changes of course or ship movements as early as technically possible.